German Jewish immigrants arrived in Ligonier, Indiana in the 1850s and began a cemetery in 1865. After building a temporary synagogue building, they raised enough money to build a permanent structure. The Ahavath Sholom Temple (Hebrew for "Peace Loving") was built in 1889 at 503 Main Street in Ligonier. It was dedicated by Isaac Mayer Wise, a well-known rabbi in the Jewish Reform movement. Click here for the full text detailing the dedication festivities printed in the Ligonier Banner on September 12, 1889. It is one of only two remaining 19th century synagogues in Indiana (the other being Temple Israel in West Lafayette, circa 1867).

Ligonier had quite a large Jewish population during the 1860s which continued until the 1930s when the population began to disappear. In 1932, the services began to be held only on High Holy Days until the temple was closed at the end of World War II. From 1965 until 1989, the temple was a place of worship by several churches. During this time, the pews and much of the furniture was removed and unable to be recovered. The Eternal Light, which once hung from the ceiling in the front of the sanctuary, was removed and presented to the Lakeside Temple of Lake Forest, Chicago, by Mr. and Mrs. Nathan Wertheimer, members of the congregation. The inscription on the light reads: "PRESENTED BY HUBERT LOESER, MAY 20-04, IN MEMORY OF MR. AND MRS. JACOB WEIL." Many of the beautiful home on Ligonier's Main Street were built by Jewish residents. At its largest, the Jewish community numbered nearly 200 families. 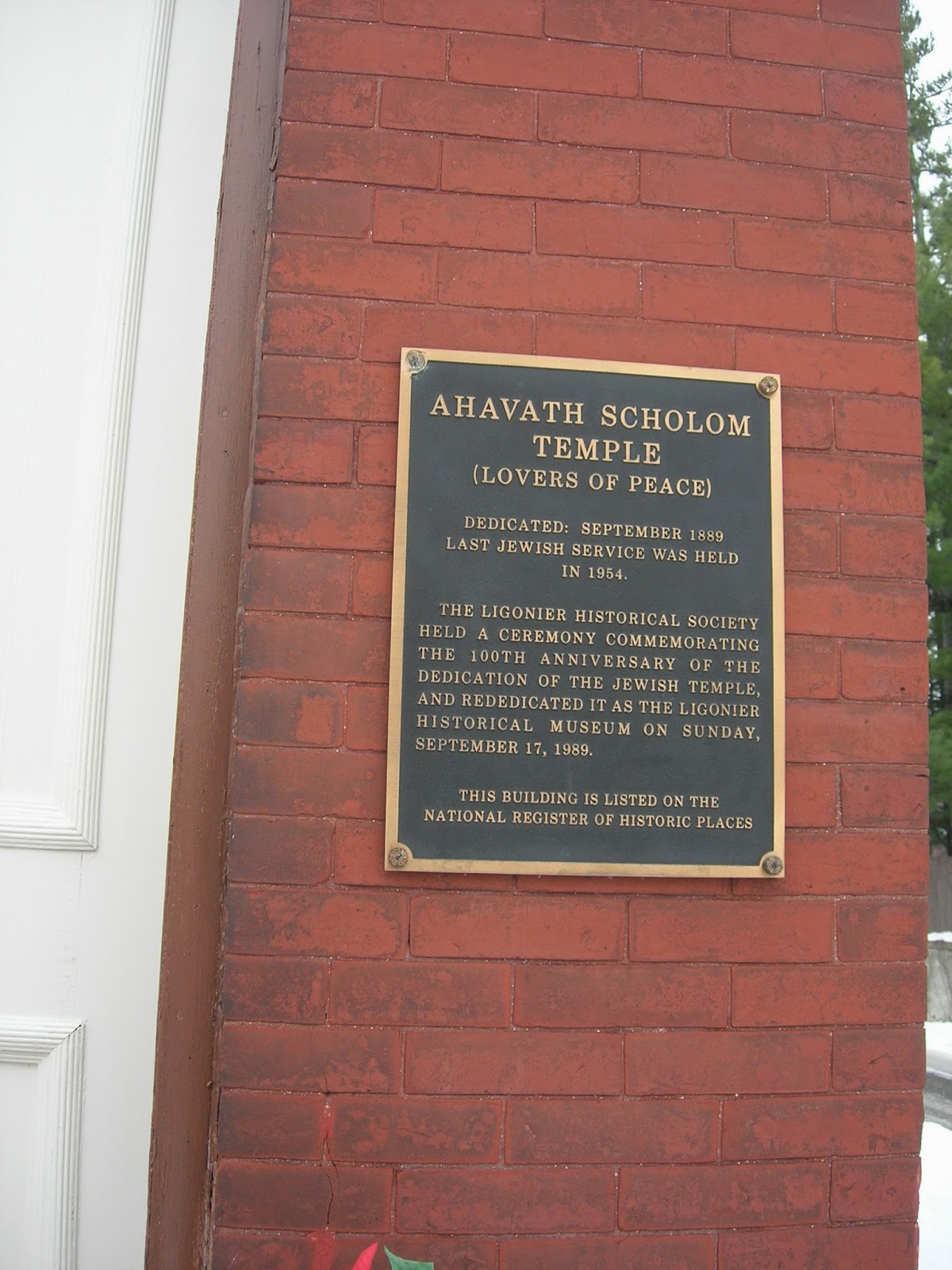 Because it was part of Ligonier's past and a great part of our Jewish Heritage, a group of concerned citizens went searching for someone to buy the temple to preserve it. It was purchased by the Ligonier Public Library, along with some grants, and was made into a museum to be known as the Ligonier Historical Museum. To help celebrate our Jewish heritage, a rededication was held in September of 1989, on the 100th anniversary of when it was first dedicated. The museum currently holds Jewish artifacts along with many items from Ligonier's past. It is listed on the National Registry of Historic Places and soon to be recognized by the Indiana Historical Bureau.

The building is constructed constructed of brick and stone in typical 19th-century German-Gothic style. Today, the building dons an asphalt shingle roof. In 1889, the building would have had a slate roof. Pieces of the original slate roof can been seen at the back of the building by the alleyway. These slate pieces are affixed to the protruding Torah ark which would have at one time held the Torah scrolls inside. This protruding ark is typical of German-style synagogues and a similar treatment can be seen in other synagogues in the US.

While visiting the inside of the Temple, one is first struck by the beauty of the three large leaded glass windows displaying three scenes of Biblical King David's life. Also seen are menorahs and the Star of David. At the bottom of these windows, green rectangular pieces of glass replace what were thought to be dedication statements. These statements would have included the names of donors who funded the procurement of the windows. The dedication statements are thought to have been replaced with plain green glass in the 1960s when the building was transformed into a church. On either side of the Torah ark,  the Ark of the Covenant and the Burnt Offering are also depicted in stained glass. The windows were not original to the temple but were added a few years after completed construction.
Please take note of the unique features of the building. We are thought to be in possession of one of the original pews. Notice the color difference of the pew compared to the color of the wood trim surrounding the windows. Because the basement was only accessible from the exterior, stairs leading down were likely added as a convenience in the 1950s or 1960s and these stairs were subsequently enclosed by a wall and a door. Original to the building is the large central chandelier. This lighting fixture was converted from gas to electric but the gas lighting turn knobs can still be seen. 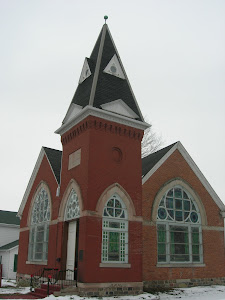 What is Ahavath Sholom?

Two entrepreneurial Jews from Germany came to Ligonier, Indiana in the 1850s and by trusting their neighbors, they co-existed peacefully in a diverse community. Today, the synagogue (Ahavath Sholom, Hebrew meaning "Peace Loving") built in 1889 is listed on the National Registry of Historic Places- a tangible symbol of a small town’s successful effort to embrace the demographic diversity that now confronts similar communities across America.

Where is Ahavath Sholom?

Who is writing this?

Wendy Soltz
Currently pursuing my Ph.D. in American Jewish History at the Ohio State University, my dissertation is on the Jewish involvement in desegregated higher education in the South. In my spare time, I love to help out at Ahavath Sholom in any way I can.